With a quick glance, you might think that Sighisoara is just like other medieval cities in Transylvania which consists of citadel, tower, fortified church… mm… Sighisoara has all of them, but there are some special things that make Sighisoara become unique, indeed!

1. Sighisoara is colorful, incredibly colorful. Orange/green/blue colors of the houses, pink color of flowers, yellow color of the autumn leaves. You will feel as if you are brightened up when walking around the city on the winding cobbled-stone alleys.

2.  Sighisoara has a stunning view because it was developed on the plateau. The historic center of Sighisoara is recognized as a UNESCO Heritage Site [i forget in what year]. It’s fantastic to walk up and down on the paved old streets passing through the history of sighisoara. It’s said that the architecture is not different from 500 years ago.

The landmark of Sighisoara citadel is Clock Tower built in 14th century. It was the main gate of the citadel.

A night shot of Clock Tower:

An interesting thing in the top of the Clock Tower is the signs on small brass plaques to show you how far from the tower is to different cities around the world.

Or Covered Stairs – a covered wooden stairway or schoolboy stairway built in 17th century to facilitate a way for kids to school on the hill or churchgoers on the hill during winter. We had a good moment of listening to acoustic guitar from the old lady. She has played so well and we were likely absorbed in her music.

3. It’s believed that Sighisoara was the birthplace of Dracula? His name was Vlad Tepes. His house was close to Clock Tower.

4. Sighisoara has a lot of towers. From what we’ve ever read, the city was founded by Saxon merchants and craftsmen. To protect a city from enemy raids, each guild of craftsmen constructed each tower and played as a defender. So from tower’s name, we can know who built it. Butcher’s Tower, Ropemaker’s Tower, Blacksmith’s tower…

We reached Sighisoara from Sibiu by a sluggish train, and stayed in the very lovely Christina and Pavel pension inside the old city.

Sighisoara in autumn is really amazing. Heard that it has the biggest medieval festival in the world in Summer. I think it’s incredible to visit too.

The fortified church of Biertan – one of the first Saxon villages in Transylvania Romania, is recognized as a UNESCO World Heritage monument.

The picturesque small village situated at the end of 8km side road from the main road between Medias and Sighisoara is one of the most beautiful villages in Romanian countryside in our opinion.

Public buses are only available during weekdays. So to get there, our plan was to hitchhike any cars from Medias to Dumbraveri, dropped in the middle, and continued walking 8km to Biertan. In fact, it was much more than we expected. People in Transylvania are soooo kind. After 2-hour bus from Sibiu to Medias, while we were walkinng from bus station to the main road for a lift, a local man stopped and gave us a ride. Immediately, we sat safely in the car. After some good small talks, he firstly let us know that he would drop us in somewhere far from Biertan 6km. However, he ‘secretly’ took us to the right destination that we didn’t even know we arrived. Without spending time for walking, we had a lot pleasure time and peaceful moments in the fortified church and around village. Thanks a lot for Transylvania people kindness!

Built from 1492 to 1516, located in the top of the hill, and surrounded by 3 fortified rings which shaped like a snail, the majestic fortified church of Biertan is mentioned as the strongest medieval church in Transylvania.

Architecture inside the church [altar-piece, pulpit…]:

In autumn, leaves are turning to yellow/red. In the autumn breeze, standing in the high place from the church, we enjoyed the colorful pastures, the smokey chimneys of the houses from the village, the typical Saxon houses with pastel colors. What a breathtaking view!

Walking around the village is also a must. The local people are so friendly, seeing us babbling a few Romanian words, they looked so excited and cheerful, then asked if we wanted to eat some bread ^^.

On the way back, we decided walking from the village to the main road instead of hitchhiking directly. The road from the valley is fully covered by wild flowers, trees with green/yellow/red leaves.

The village ambiance is like a beautiful harmonic rhythm. It’s a must in Transylvania area. Really impress and love this place. 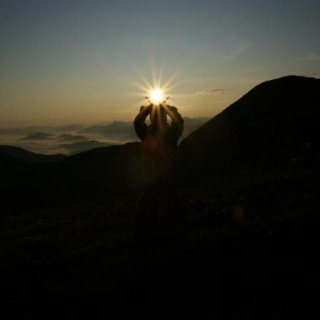 We are Bin and Tam, the 2 Vietnamese smile wanderers ^^ We love trekking, backpacking, and taking photo. We love the nature, especially the sea/island, the mountain and valley. We love meeting people from different culture on our road.